The Mysterious Force
by J.-H. Rosny aîné
First published in French as La force mystérieuse in 1913.
This review based on the Brian Stableford translation (or ‘adaptation’ as he describes it).

That the Earth might swallow its inhabitants, that the seas might drown the continents, that a deadly epidemic might carry off all living things, that the Sun might go out, that a fiery star might burn them or a displaced planet crash into ours — they were conceivable events, in the image of things that had happened since the beginning of the world… but this fantastic death of light, this dying of the colours, which affected the humblest flames as well as the rays of the Sun and those of the stars, derisively gave the lie to the entire history of animals and men!

In J.-H. Rosny aîné’s The Mysterious Force, the eponymous force, later described as an ‘interstellar cyclone’, passes through the Earth and forever alters daily life. At first the force causes widespread anxiety and even helps spark a worker revolution that is ruthlessly suppressed by the French military. But worse is to come as the colours of the spectrum begin to disappear leaving a wan, grey reality barely animated by a lacklustre and dying humanity. Global civilisation is severely disrupted as technology and even the chemical reactions of material reality fail. Eventually the worst of the catastrophe passes. However millions have perished and a strange new world begins to manifest.

Those that survive the catastrophe find themselves covered in hieroglyphic ‘rashes’ that are later discovered to be the manifestation of an alien presence beyond visible perception. The rashes are more manifest symptom than alien appearance. Perhaps even stranger are the far reaching effects of the alien presence upon the animal life of Earth. Thus is marked the onset of ‘groupism’, a type of super-individual intimacy that binds together extended family and friendship groups into near telepathic gestalts, including even nearby non-human animals. Rosny aîné doesn’t present this as a disaster — the horror of collectivism descending on virile, competitive and fiercely individual Man — but rather as a type of communal idyll in which individuals reach new levels of individuality precisely as a result of the more heightened sensitivity to their intimate others. Such a view is a refreshing alternative to the barely repressed horror of the collective individual in such works as Robert Heinlein’s The Puppet Masters and more recently Star Trek’s Borg collective. And yet the emergence of this desirable collectivism in the story is more like a disease than a conscious decision (in contrast to the attempt at socialist revolution that is thwarted early on). Rosny aîné’s representation of an accidental transformation has the tang of pessimism and misanthropy.

Nonetheless there are some wonderful ideas pressed into serving the fairly mundane adventure and romantic threads of this novel. Its core idea was one common to Rosny aîné: if there are forms of life and intelligence outside the terrestrial realm they will almost certainly be utterly alien, verging on the incomprehensible.

Permit me, Gentlemen, to conclude with a hypothesis […]. Considering that the interplanetary storm gave rise to a cycle of phenomena […] we may conjecture that it is a world, or a fragment of a world, that has encountered the Earth. To all evidence, this belongs to a system very different from our solar system. […] It might be that our space includes different kinds of universe, some of which are capable of partial interaction with one another, and others almost complete in their mutual indifference and even their mutual permeability.

Such a perspective is there in his early The Xipehuz (1888) and his stunning Dying Earth story avant-la-lettre, The Death of the Earth (1908). In this he anticipated the later author Stanislaw Lem, who made the idea of the utterly alien a recurrent trope of his science fiction, written in the midst of the only too comprehensible cold war of Soviet state capitalism and Western ‘free market’ welfarism. Lem’s perspective is a hypertrophied development of the cultural cold war. The universe is not only strange, it is incomprehensible. Rosny aîné’s perspective is to my mind more interesting and less sceptical. His aliens are truly alien but not beyond the limits of rational inquiry and human understanding.

Rosny aîné was an old man when Stalin and Hitler came to power, dying at the age of 83 in 1940. He did not live to see the complete, horrible extent of World War Two, dying some months before the fall of France to the Nazis. Unlike Lem he did not emerge as a writer under the pervasive cloud of post-war existentialist absurdism. And unlike his contemporary (and junior) H.G.Wells he was less concerned with the utopian and dystopian promise of industrial civilisation and more interested in the potentially infinite variety and strange possibilities of life in a vast and long lived universe.

Nonetheless there is a residue of the utopian promise of the late 19th and early 20th century in his work, albeit shot through with a peculiar sadness. Indeed Rosny aîné repeatedly conjures the vast and time weary melancholy that Wells so briefly and beautifully wrote of at the end of his first novel. 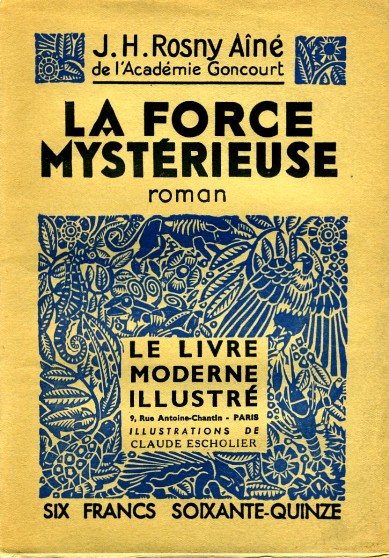