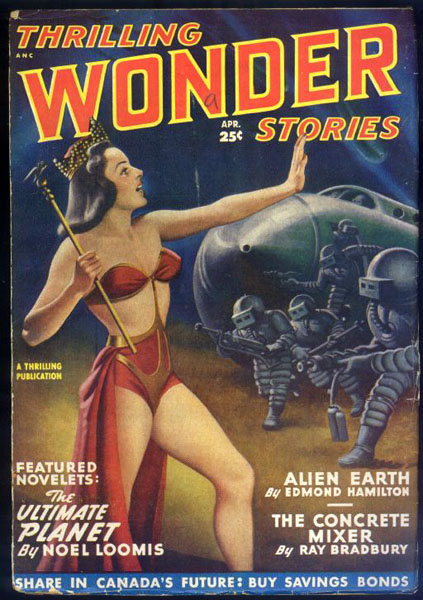 I hazard to even guess what is going on in this pic. At the very least the contrast in clothing options is remarkable.

Poor Edmond Hamilton! Should I even say such a thing?

“The slow, pulsing beat of day and night alone was enough to unseat one’s reason.” (152)

Variously known as the world saver and world destroyer, Hamilton was one of the few kings of the 1930s pulps who continued to have a relatively successful career after the Campbell “revolution”. To the extent that this was also helped by his marriage to the excellent Leigh Bracket, author of the cool Eric John Stark stories (and script writer of one of the best westerns bar none, Rio Bravo) is a question worth pursuing – but sadly beyond the scope of this brief review.

“But modern man has forgotten this other Earth. Except me, Farris – except me!” (156)

Alien Earth is a story published some years after Hamilton’s pulp heyday. Even though it is perhaps more ruminative of the insignificant fate of the human against the background of “nature” than much pulp, it’s pure pulpy goodness nonetheless. The fetid, jungle setting initially reminded me of Ballard’s The Crystal World (The Drowned World?). Even the central conceit of Ballard’s novel appears to be influenced by Hamilton, albeit filtered through Ballard’s self conscious concern with literary modernism. In the story Hamilton channels H.G. Wells and William Hope Hodgson, in the process turning Wells’ The New Accelerator on its head to reveal a hidden world which surrounds and under-girds humanity’s misplaced self-importance. All with a dash of colonialist hierarchies (the drug addled intellectual fled to the authenticity of the jungle frontier) and you have the perfect pulp confection.

Just my kind of story!